Optech Incorporated was established in1974 under the joint ownership of Helen and Allan Carswell. Allan as a professor at York University in Toronto, Canada, had pioneered research in lidar systems. Ontario Hydro had supported use of the York mobile atmospheric lidar to map the invisible smoke plume from a new coal-burning power station. This work was so successful that Hydro decided to purchase a lidar of its own. Since this could not be done via the university, Allan and Helen decided to set up Optech and present a proposal. The proposal was accepted and, since Allan had full time responsibilities at the university, Sebastian Sizgoric was hired to run the company. These three were the creators of Optech.

Allan led Optech as president from its inception until he became Chairman of the Board in 2000. Under his leadership, the company has grown over four decades to become a world leader in the development and applica

tion of lidar and camera systems for airborne, terrestrial and hydrographic surveying as well as 3D imaging, environmental diagnostics, and industrial process control. Optech works closely with commercial, government, military, and space-based organizations to meet their specialized application requirements. Since 2012, a Teledyne majority-owned company, Optech continues expanding its commitment to advancing the state of the art of the technology and its applications.

Allan graduated from the University of Toronto with a B.A.Sc. degree in Engineering Physics in 1956 and a Ph.D. in Physics in 1960. In 1960-61 he studied at the Institute of Theoretical Physics of the University of Amsterdam on a Fellowship from the Canadian National Research Council. In 1961 he joined the Plasma Physics Laboratory of the RCA Victor Research Laboratories in Montreal, studying the interaction of coherent electromagnetic waves with ionized gas systems. In 1965 he was appointed founding Director of the RCA Optical and Microwave Research Laboratory, the first laser R&D group in Canadian industry. This group developed Canada’s first CO2 and commercial Helium Neon lasers. In 1968 he joined York University in Toronto, as a Professor of Physics, where he conducted laser research. This work included the investigation of the properties and applications of high-power CO2, nitrogen and dye lasers, and the study of laser scattering techniques for remote sensing and environmental diagnostics. At York Allan pioneered in the design and development of lidar systems and their application to atmospheric and bathymetric remote sensing. By 1974, these early lidar systems had proven so successful that Allan along with his wife Helen established Optech to commercialize lidar technology. Since then the Optech team has continued to explore ever more advanced applications of lidar and laser imaging technology. On invitation from NASA Allan led the team that provided the first lidar to operate on the surface of Mars to study the atmosphere of Mars as part of the 2007 PHOENIX mission.

Allan is the author of over 200 scientific and technical publications and has received awards for his achievements in entrepreneurship, R&D, innovation, photonics and space science. He has been awarded the Order of Canada and the Queen Elizabeth II Diamond Jubilee Medal. He is a Fellow of the Royal Society of Canada, the Canadian Academy of Engineering, and the Canadian Aeronautics and Space Institute, and is a member of the Canadian Association of Physicists and the Association of Professional Engineers of Ontario. He has held a variety of senior positions in scientific and technical organizations, including President of the Canadian Association of Physicists, Vice-President of the Canadian Academy of Science, and member of the Boards of Directors of a number of industrial corporations and public institutions. In 2009 he was named Ontario Entrepreneur of the Year in Manufacturing and was inducted into the University of Toronto Engineering Alumni Hall of Distinction. 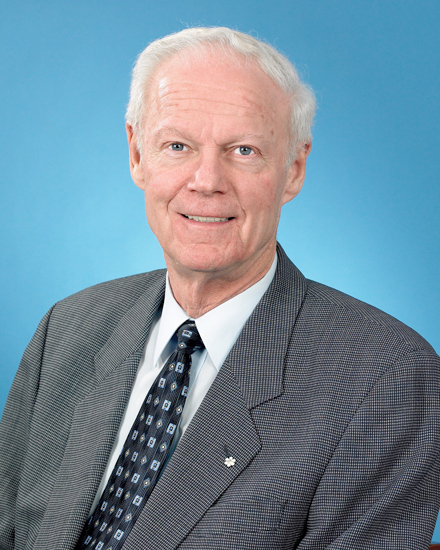 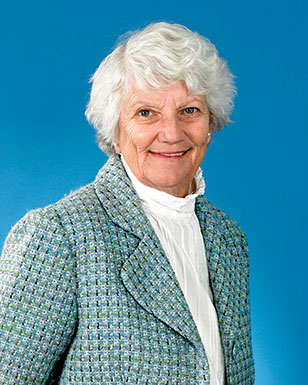 After graduating in 1955 as a registered nurse from the Toronto East General Hospital Helen worked there for several years as an Assistant Head Nurse. Following their marriage in 1956 Helen and Allan lived in Amsterdam and Montreal prior to returning to Toronto in 1968. Belying her outwardly quiet and gentle demeanor Helen has made a great many unsung contributions to her family and to many others. It was at her insistence that the family moved from Montreal to Toronto in 1968 and this move was really a “life-changing event”. It radically altered the focus of Allan’s career by initiating his professorial role and his work with lidar which led to the establishment of Optech.

In Toronto Helen began to display her entrepreneurial skills. In 1972 with her sister, Ruth Gardiner, and friends, Phyl Rose and Marie Evans she established Sew Rare, a “cottage industry” involved with the production of ladies wear and craft items. Sew Rare was a successful part time venture, high in personal satisfaction for the staff but rather marginal in the financial payoff. Starting in 1974 Helen entered the business world full time as the co-founder and Secretary-Treasurer of Optech Incorporated a position she held until her retirement in 2009. In the early days the division of labour at Optech was quite simple. Allan looked after the technical stuff and Helen handled the rest. Her first task at Optech was to take a secretarial course so that she could provide the administrative needs of the new company. In the beginning Helen was the sole member of Optech’s office staff. As Optech grew she was a leading player in all aspects of Optech’s business affairs, setting up and developing the human resources, financial and administrative operations needed for a new high tech company. Optech has had a major impact on a large number of people. It has provided thousands of person-years of high-value employment, hundreds of millions of dollars of Canadian export sales and has pioneered the development of the leading lidar technology that took Canada to Mars on the NASA 2007 PHOENIX mission. None of these things would have happened but for Helen’s creative and dedicated contributions to Optech over so many years.

Throughout her career Helen has been active in community service and philanthropic affairs.  She was musically very active, playing the piano and the violin and singing for many years with the Sweet Adelines. She continues to support a number of educational and health care initiatives including music programs of the Regent Park School of Music for over 100 students in the Jane-Finch area of Toronto. Her philanthropic contributions to the East General Hospital have been recognized by having the Carswell Family Health Centre and the 75-bed Helen Aird Carswell Complex Continuing Care Service named in her honor. Sadly in her later years Helen has been greatly affected by the development of Alzheimer’s disease leading to her retirement from Optech in 2009. While still living at home with Allan, Helen has retained the special ability to cheer her surroundings with a wonderful smile that has never diminished.

Sebastian joined Helen and Allan Carswell at Optech in 1974 as the onsite manager of the new Optech facilities. In addition to his day-to-day management activities, he had technical responsibilities on lidar projects that centered on the design and development of several atmospheric lidar systems, as well as on airborne lidar systems for underwater bathymetric measurements. As Optech grew he became Vice President of Engineering R&D, where he was involved in the technical development of the rapidly advancing technology of airborne lidar systems.  Because of his advanced technical knowledge and his outgoing and friendly personality, he subsequently served for many years as the Vice President of Business Development at Optech, responsible for the broad-based company business interactions with customers as well as educational and “missionary” activities with potential lidar users.

Sebastian received his M.Eng. Degree from McGill University in Montreal in 1968 as one of the early researchers on medical applications of laser diagnostics. In 1969 he joined the Opto-Electronics Group at RCA Victor Research Laboratories in Montréal where he gained experience in optical and infrared spectroscopic techniques, optical detection and signal processing working on space-qualified FM communication systems based on a CO2 laser, and a CO2-based Doppler imaging radar.

In 1971 Sebastian joined Allan Carswell’s research group at the Centre for Research in Experimental Space Science (CRESS) at York University as a project scientist. At York he helped to develop and operate the atmospheric lidar that so impressed Ontario Hydro and led to the founding of Optech. In addition he was project leader of the team at York that developed the cavity-dumped argon lidar system used for probing underwater targets. In the fall of 1973, Sebastian heeded the call of a permanent position outside academia, and joined the Electro-Optics Group at SPAR Aerospace as a Responsible Equipment Engineer on the Canadian Communications Technology Satellite program. There he concentrated on the electro-optic sensors of the satellite’s solar array, before joining Optech.

In 2001, after many years at Optech in Toronto, Sebastian moved to the USA to assume the position of President of Optech International Inc., Optech’s newly opened U.S. subsidiary at NASA’s Stennis Space Center in Kiln, Mississippi. He continued in this role until he was required to take a leave of absence to begin treatment for the advancing cancer that unfortunately took him so prematurely in 2008. Those who worked with Sebastian came to know him as an excellent scientist, an inspiring leader and, perhaps best of all, a dear friend. His many gifts, his talents and his seminal contribution to the advancement of lidar technology as well as the joyful sound of his laughter are fondly remembered.

Sebastian has a number of scientific and technical publications in the field of lidar and laser applications, and was a member of the Association of Professional Engineers of Ontario. The Sebastian Sizgoric Technical Achievement Award was established in his honor by the U.S. Army Corps of Engineers Joint Airborne Lidar Bathymetry Technical Center of Expertise (JALBTCX). It is presented annually in recognition of major scientific achievements in airborne lidar bathymetry, coastal mapping and charting.